The Company’s business model is based on providing waterway transport solutions specifically developed to meet the needs of its customers. Currently, the Company operates on 4 main logistic routes(North, South, Coastal Shipping, and Salt/Santos), and has four strategically located port terminals in addition to a fleet of more than 400 cargo barges, 28 pushers (main or auxiliary), 4 speedboats, and 2 coastal vessels.
Major clients include international companies in the agricultural trading, mining and pulp industries such as: Vale International S.A. (“Vale”), Cofco Group (“COFCO”), Norsk Hydro ASA (“Norsk Hydro”), and Sodrugestvo Group S.A. (“Sodru”). In addition to contracts with first-rate customers, it has long-term take-or-pay contracts, which provide for a minimum payment to guarantee the provision of integrated logistic services based on a volume previously agreed between the customer and the Company.
Such take-or-pay contracts not only provide greater predictability andresilience to the business but also ensure that rates are adjusted annually based on changes in fuel costs, labor agreements and inflation, and have an average term of around 14 years (calculated asa weighted average of contracted revenues). In the fiscal year ended December 31, 2020, 62.9% of the Company’s Net Revenue came fromlong-term take-or-pay contracts.
The main logistic corridors operated by the Company:

The map below shows the Company’s current areas of activity: 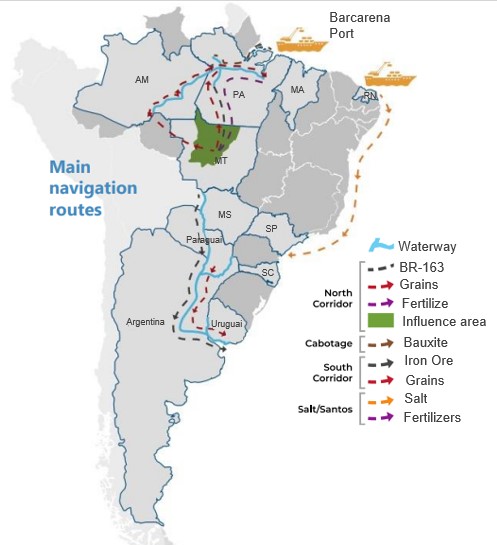